Basically, we are made up of stardust. And, there is no reason to think that we are any less fractal than the bigger whole that we belong to. We can talk about carbon, hydrogen, nitrogen and so on. We can talk about energy. We can talk about religion. Regardless of the preferred language, we are talking about high-level organization, hierarchy of needs, and the amazing ability for life to occur and renew itself. We are amazing human creatures.

Early medical education in the West sought to dissect it and name it all. We gave function(s) to part(s) and labeled up the human body like a sophisticated machine. It makes historical sense that we took this approach. Timing overlapped with the coming of the industrial era. This was the culture of the time. That does not mean it was right.

Time rolls on. Collective consciousness shifts. We all know that we are not the sum of our tissues and cells. We are not machines. You can’t just refill fluids and swap out parts.

None the less, medical education treads on and the books have been written. Falsely perpetuated ‘knowledge’ has passively been handed down generation after generation. Health care tales have become embedded in our media, culture and care. We are the most unhealthy American cohort of all time.

I used to be passionate about teaching in the cadaver labs at colleges and universities. I thought that this would be a place that we could surely impress the ‘whole’ of a person while still following the language of anatomy and dissecting out pieces and parts. But I decided pretty quickly that teaching future healthcare providers would not and could not be an effective way of impacting the story. The establishment of healthcare doesn’t allow providers to practice in that way, so even if they have been trained to see whole people, it isn’t compatible with the way they have to practice in our healthcare system. People are the ones that need to understand what makes them whole. And so here we are.

When I was teaching, I would always belabor this lecture that I’m presenting to you here. Not because it was complicated but because its implication and metaphor got overlooked and underpondered. This basic hierarchy proposes all the parts that have to come together to make a system and that multiple interconnected and interdependent systems are necessary to make a whole. The metaphor is big. In it, I see more than just something to remember for the quiz. Chapter 1 is important. Genesis. 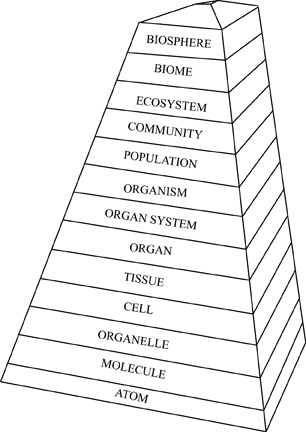 Atoms form molecules. Molecules are structural building blocks that eventually become the structural support, organelles and membranes of our cells.

When multiple cells come together a tissue is formed. Our complex body is made up of only four basic tissue types: 1) nervous tissue, 2) muscular tissue, 3) epithelial tissue and 4) connective tissue.

When these four tissues integrate an organ is formed and when multiple organs support each other functionally, there is an organ system. The human organism is formed of eleven organ systems, they are the 1) integumentary system (skin), 2) skeletal system, 3) muscular system, 4) nervous system, 5) respiratory system, 6) digestive system, 7) urinary system, 8) reproductive system, 9) circulatory system, 10) endocrine system and 11) fascial system. (Note though that depending upon how one subdivides the organ systems there can be nine to twelve.)

When the organ systems function together, an organism is formed. A human body. 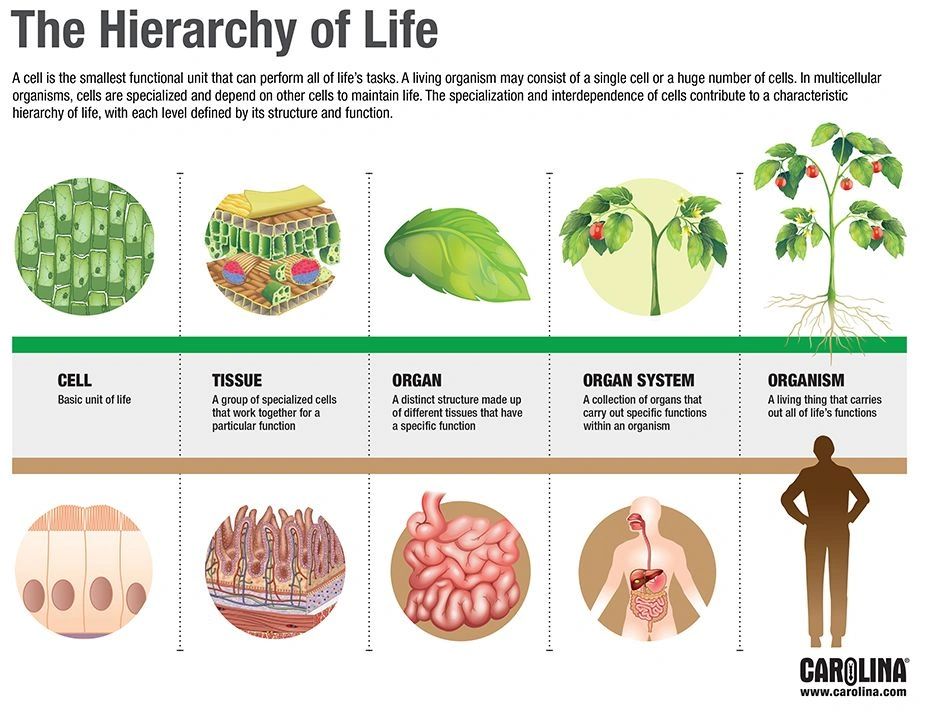 Like the cosmos, the more you look into the smallest parts, the more hidden worlds open up. Even if this hierarchy of needs is an incomplete story, it repeats itself and repeats itself all throughout the natural world. Interconnectedness. Interdependence. We are part of something unknowably big.

“There are no basic ‘building blocks.’ Quantum physics paints a strange yet enticing view of a world that, as Heisenberg characterized it, ‘appears as a complicated tissue of events, in which connections of different kinds alternate or overlap or combine and thereby determine the texture of the whole. These unseen connections between what were previously thought to be separate entities are the fundamental ingredient of all creation.”